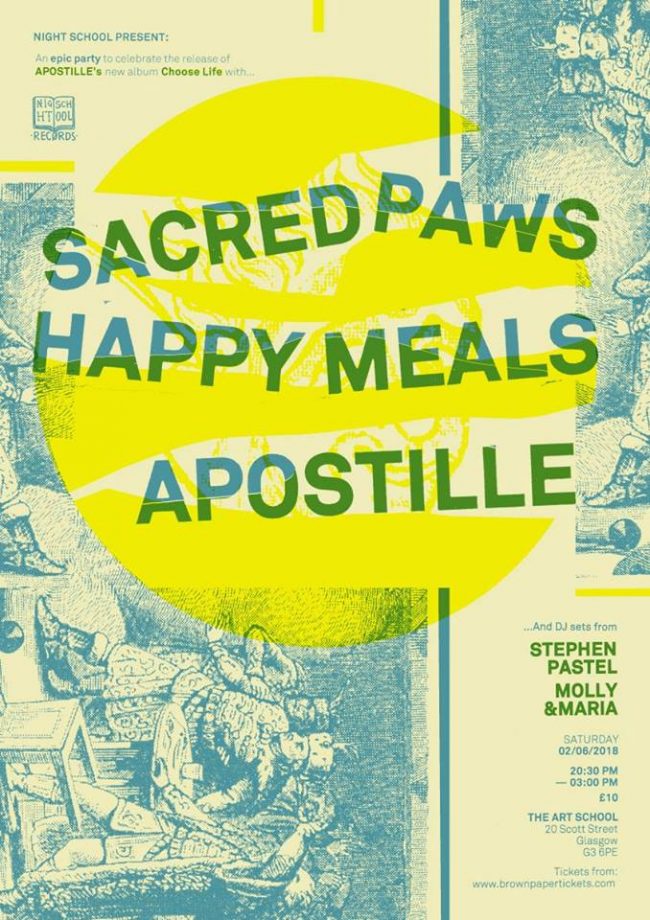 To celebrate the release of Choose Life, we’re throwing an epic party with our favourite bands, friends and party-starters. Surely no one needs any introduction to these people but let’s do one anyway:

When Sacred Paws launched their first release back in 2015 (was it 2015? 2016?) on Rock Action, they invited Apostille to play the launch. In an attempt to embarrass / flatter them I covered their song San Diego. It was a beautiful evening and they’re one of the most exciting, fun, rollercoaster-speed pop groups in THE WORLD. Since that evening they’ve toured the world, recorded the best Scottish album of 2017 in Strike A Match and are now a full-band, full-of-life extravaganza. I love them.

Where would Glasgow and I be without Happy Meals? Happy Meals played the first Glasgow Night School All-Dayer in May 2015, back then they were irresistibly charming, playing backing tracks off cassettes and just beginning to realise their ability to reach out, connect psychically with the audience. Since then they’ve released 2 albums on Night School, toured the world, flattened festivals and brought profound Happiness everywhere. I love them.

I worked hard on my record. I’m trying to break out comfort zones, more connection, more interaction, less aggression, more session. My friend, superstar bass player Moe Meade aka Lady Neptune is now 1/2 of Apostille. I’ll be playing a set first at this. I love it.

My Resident Advisor. One of the most intuitive and fun DJs I know. A highlight of the last 5 years for me is Stephen dropping Chaka Demus & Pliers Tease Me at the CCA prompting mass crowd surfing in the downstairs cafe. I love him.

Two EXPERT party selectors from Sweden. You’ve not lived if you’ve not heard Darude or Toploader at full volume in the Vic Bar with all your drunk friends. I love them both.