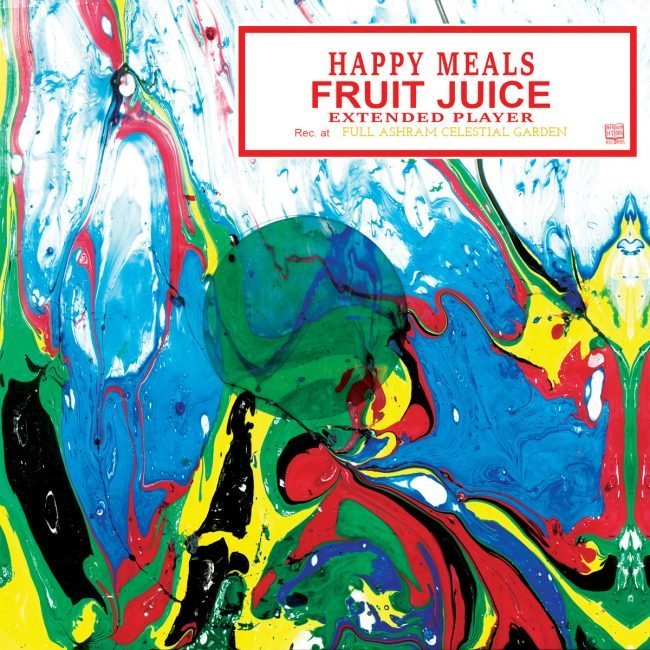 Preorder Happy Meals Fruit Juice Repress on 12″ and, for the first time, on CD.

After relocating back to Glasgow in 2014, Happy Meals were the first artists Night School worked with from our hometown. It was a purely organic affair; introduced by a mutual friend, the band were asked to perform at our first Night School all-dayer in Stereo. It’s strange to think that the nervous duo who took the stage that day playing their music off cassettes, 6 months before their debut album Apéro was released would become such confident, ebullient performers. Apéro was released to universal acclaim (including a Scottish Album Of The Year nomination) and followed in May of 2016 with Fruit Juice.

Fruit Juice is a maturing of the Happy Meals sound, technically brilliant and laden with hooks for days. Tracks like La-Labas showcased Suzanne Rodden’s vocal prowess while full-blown disco blow-outs like If You What Me Now cement Cook and Rodden’s grasp on the groove. Selling out pretty quickly, we were faced with the dilemma for a repress. The original 12″ came housed in a hand-marbled plastic inner, each unique and the result of laborious workmanship. Happy Meals and I and countless friends ensconced ourselves in The Flying Duck in Glasgow with boxes of oil paints and buckets of water, each of us taking breathing breaks as we became intoxicated with the oil fumes. Suffice to say, no one really desired the experience again so we replicated the effect here. Around the time of Fruit Juice, Happy Meals commissioned two friends to remix tracks from the E.P. StabUDown Productions – aka Jim Donadio of Prostitutes – deconstructed Suivez Moi into a tough, spartan proto techno skeleton and I had the pleasure of taking apart If You Want Me Now and rearranging the bits I loved most into a relentless Italo track. But from Scotland. These tracks never made it to vinyl but they’re available on the download and on the CD issue of Fruit Juice, which is released for the first time on December 8th.

Happy Meals are special, all hail.