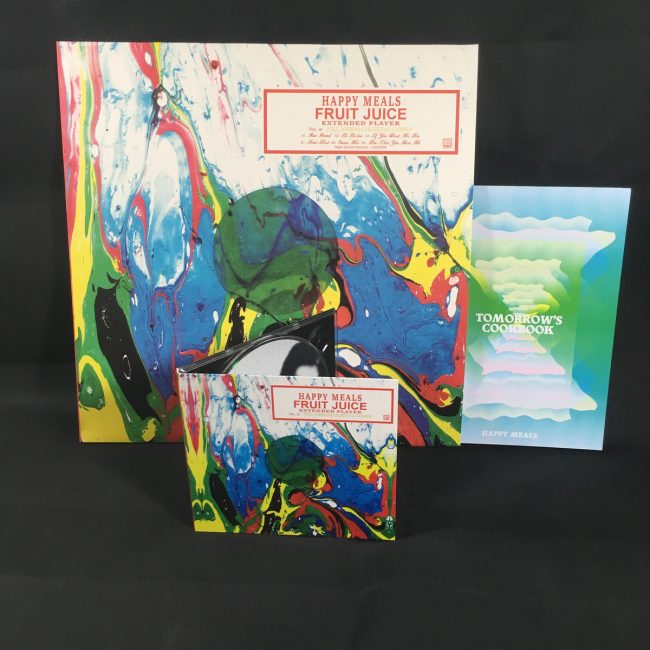 Happy Meals is an idea. It’s more than a band, it’s a pointer to the future where the old order has crumbled away, corporate intellectual property laws are in tatters (we still haven’t received a letter from Ron), we’re post-Capital and making the world we want. It’s easy to dream but sometimes you have to do something about it. Suzanne Rodden and Lewis Cook are just people really but they’re trip advisors for where we’re going. Hyperbole and flowersome language aside, they’re also my friends.

This was the first music I heard coming from my hometown that really hit when I returned here after 10 years in the wilderness. To me it speaks directly, it’s playful but serious and like aural sunshine in differing intensities. There’s something alchemical in fact, in that Rodden can sing simply about where she’s going on holiday (I’m paraphrasing here) and yet the message transcends the medium. It’s the truth. We released the band’s debut album Apéro and they built what they wanted to see in the world from scratch. When it was time to do Fruit Juice, the extended, more-developed sound of Happy Meals, Lewis came to me with this idea of hand marbling the outer sleeves and designing a fanzine to go with the record.

What followed was a mad few weeks wherein we discovered that hand-marble painting over 500 sleeves isn’t as easy as the words it takes to describe it. There were also some Spinal Tap-esque miscalculations on how much paint we’d need and how much it would cost. Happy Meals enlisted so many friends to help that if we were to have given a free record to everyone that helped that would have been the pressing gone. I can still smell the oil fumes in the furthest reaches of my sinuses. I’m immensely proud that we’ve gotten to the point of repressing Fruit Juice (with a standard 3mm spend cover alas), on CD for the first time with remixes from our friend Jim Donadio (Prostitutes/Stab U Down Productions) and myself, but I’m even more proud of wherever this band will go next.