J. McFarlane’s Reality Guest – out and on tour! 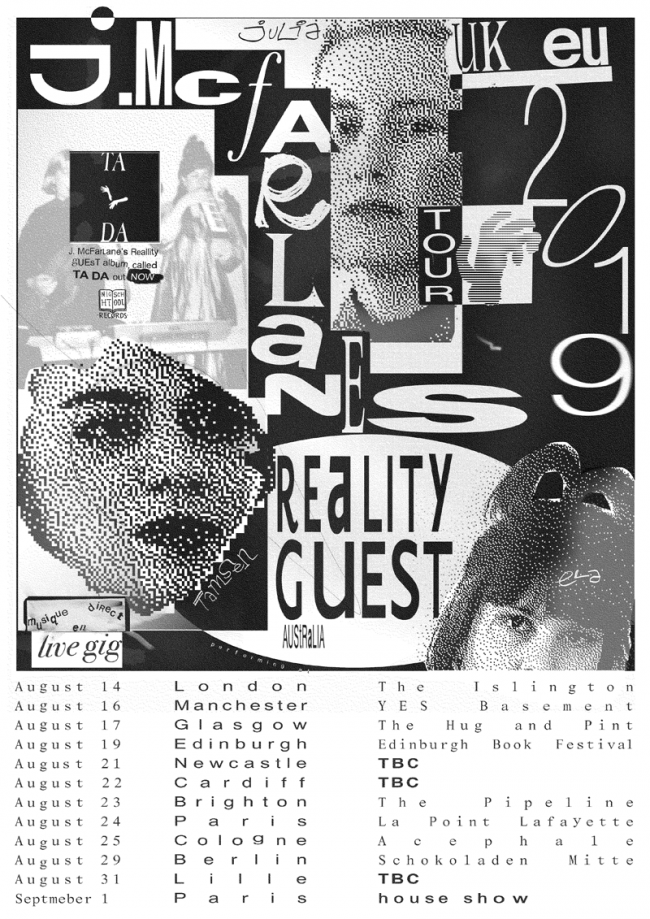 J. McFarlane’s Reality Guest are on tour in UK/EU in August! The trio will be coming over for the first time and we’re excited to host them. Get in touch if you’d like to fill a date or two. 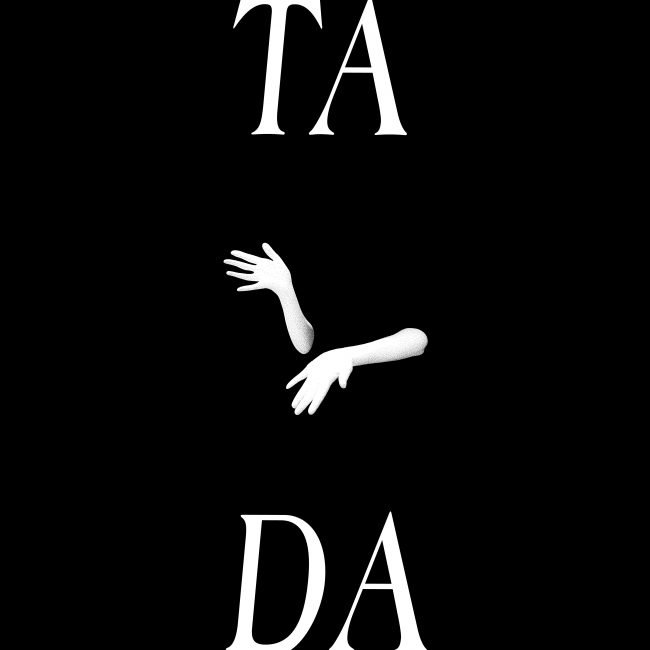 We’re so thrilled to present the debut J.McFarlane’s Reality Guest: Ta Da after an instantly sold out pressing on the Australian label Hobbies Galore.

As a member of the group Twerps, McFarlane has traversed guitar-centric, melodic pop music for some years while honing a highly unique, personal musical language. Ta Da is the first recorded unveiling of McFarlane’s affecting, oblique songwriting panache. Originally released in her native Australia on Hobbies Galore, Ta Da will be released worldwide by Night School in June 2019.
Wheezing into view with a troubled reed instrument set against a s of whoozy synth lines, Human Tissue Act is a foggy curtain the listener is invited to peel back. The dissonant notes are left to dance entwined, with clarinet heralding a Harry Partch-esque mallet percussion interlude. It’s a mood. With no resolution in sight, an audience dragged closer into uncertainty is suddenly drenched with the light of inter-weaving wah wah synth and saxophone. I Am A Toy introduces us to McFarlane’s vocal, an effortless and matter-of-fact, accented statement that quietly takes the reins. While McFarlane’s previous work in Twerps might reference 80s UK and antipodean guitar pop, Ta Da showcases a different influences immersed in psychedelic music and synths. It’s a brilliant, deft concoction swimming in Young Marble Giants-type minimalism washed with bare pop and harmony similar to Kevin Ayers making sense of a Melbourne suburb full of faces half-recognised in the blanching sun.

What Has He Bought begins with a Casio-keyboard rhythm pattern, palm-muted guitars and immaculately enunciated vocal give way to a burnt melodica part that elevates the spirits. Simple patterns repeated, like a well-tempered pop song that does what it needs to do and no more, build into the sound of summer leaking orange juice. They’re moments of joy, layered on top of each other like a melting cake. Do You Like What I’m Sayin’ recalls Marine Girls covering a classic ‘66 Garage nugget, organ lines fighting funk with guitar chords played just behind the percussion. “In a talking world, meanings are the same. Words want to hold on to the people they contain. Do you like what I’m sayin’?” We’re in a Beckett play perhaps, obtuse absurdities rendered pretty. Alien Ceremony is a heart-melter, given a melancholic timbre by bowed double bass it’s a tragi-comic piece that almost reeks of Robert Wyatt at his mid-whimsical twisting a fugue completely out of shape. Beneath the layers of harmony and twinkling instrumentation you sense there’s a genuine sadness somewhere even if it remains veiled.
Through out Ta Da, McFarlane plays with counterpoint and contrast to sometimes delirious effect. On Your Torturer, a simple, upbeat chord progression is hard panned, underpinning a flute solo which seems out of place, hence making it completely in place on this warmly surreal album. My Enemy is a slowly swinging eulogy to a failed relationship punctuated by analogue synth burbles, with our protagonist simply asking, in the aftermath, “can we be nice?” Here McFarlane’s vocal is straight forward, lyrically conversational but still not completely in focus, a surreal kitchen sink drama filtered through a dream where everything is in the wrong place. It’s a fine precursor to Heartburn, which similarly borrows BBC Radiophonic Workshop-style noise synths and the use of space to carve up the simple “You Will Make My Heart Burn” line. At this point, the listener has been in such close proximity to McFarlane’s show, the reality guest in a performance where they’re the sole audience member, that when Where Are You My Love rises on the horizon as a sleepy, psychedelic send off it’s uplifting. The vocal drifts away into the sunset, simple and direct. It leaves the listener slightly confused, perhaps, but grateful for the gentle surprise.